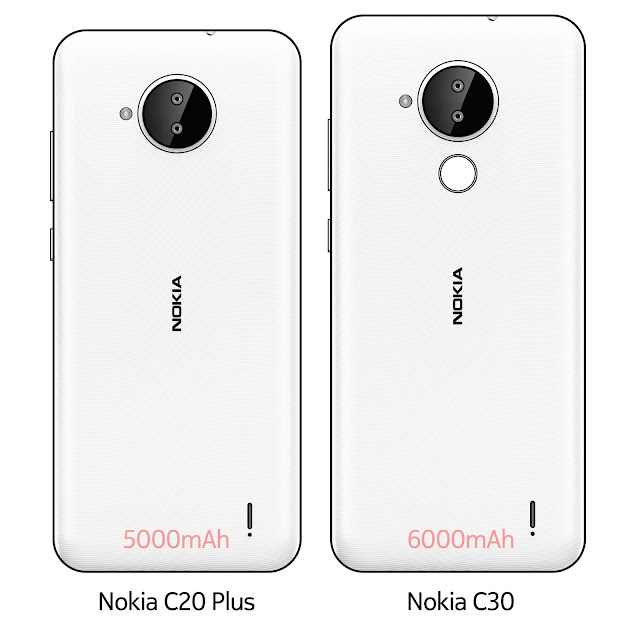 Nokia Mobile is focused on strengthening its budget smartphone lineup and is all set to expand the Nokia C series family by adding two more smartphones very soon. The news comes (after a very long time) from the popular Nokibar community forum on Baidu.

The post on the forum has a sketch/diagram of two Nokia smartphones that should be going official in a few weeks if not days and also mentions the name of each device. So, we are looking at a Nokia C20 Plus and a Nokia C30 both of which will be low-end phones with big batteries and we can also see the Dual Camera setup at the back. The external design of both the devices is similar to the recently launched Nokia C10 and the Nokia C20 and also has the same curved lines on the back panel. Nokia C20 Plus will have a 5000mAh battery while the Nokia C30 which also is larger in size will have a 6000mAh battery inside. Another difference apart from the physical size and battery capacity between the two phones is the fingerprint scanner which is missing on the Nokia C20 Plus.

There are no details about the camera specifications but the Dual camera setup could most probably be a combo of a Primary Camera + a depth sensor like on every budget smartphone. Would be a really nice touch if they add a macro camera like on the Nokia 1.4 or at least a low-resolution Ultra Wide-angle camera and make the Dual Camera setup on both these devices a bit more useful. We will have to wait for the official launch to know more about the cameras and also all the other specifications like processor and storage options.