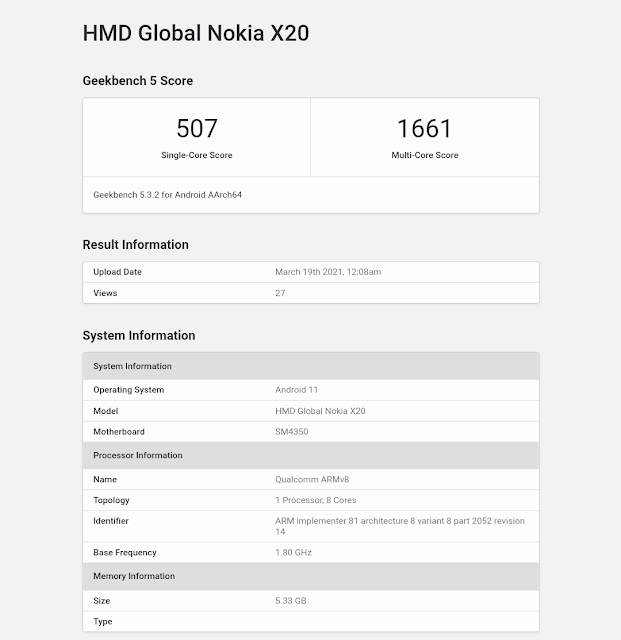 As we are getting closer and closer to the upcoming Nokia launch event we are seeing new details emerge about new Nokia smartphones that could possibly be announced at this event. Just a couple of days back we saw the Nokia G10 with Helio P22 processor appear on Geekbench and today we get to see the Nokia X20 appear on the Geekbench for the very first time.

From the Geekbench listing we now know that Nokia X20 will be powered by a Snapdragon 480 chipset and will have 6GB of RAM. The phone will be running on Android 11 out of the box. As you can see in the screen shot above, it has a single core score of 507 and multi core score of 1661 which is even above the Snadrogon 710 powered Nokia 8.1. So, we can expect a good performance from Nokia X20.

Qualcomm Snapdragon 480 is a pretty powerful processor and will bring 5G to the lower mid range segment along with some nice features that are mostly found on mid to higher mid range smartphones. Snapdragon 480 has support for upto FHD+ Display with a high refresh rate of 120hz, Qualcomm aptX audio, some cool camera features like capturing images or recording 720p videos simultaneously from all three camera sensors at the same time. If all these features are present on the Nokia X20 then it could be a very nice offering from Nokia Mobile.

Nokia X20 is shaping upto to be a nice mid ranger from Nokia Mobile and if we go by the performance I think it will take place of the Nokia 6 or 7 series. We will have to see how Nokia Mobile sets the price of this smartphone but I expect it to be around ₹20000 or around €250. I would like to know your thoughts about the Nokia X20 in the comments below.