Nokia Mobile gearing up to launch new phones in India 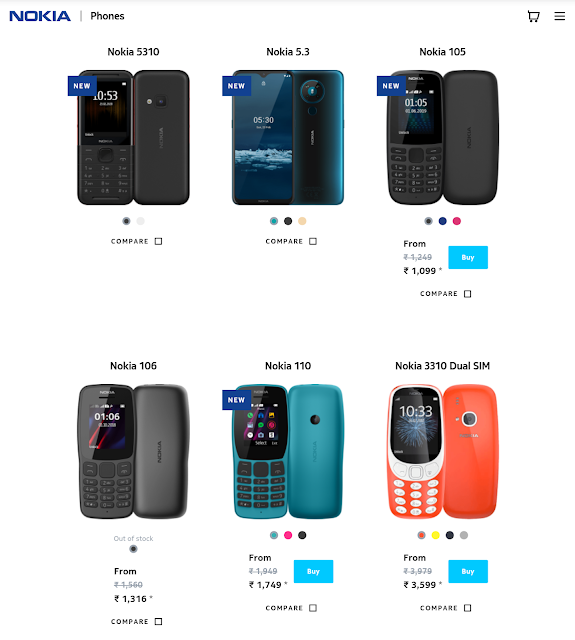 Nokia Mobile launched Nokia 1.3, Nokia 5.3, Nokia 8.3 5G and the Nokia 5310 in March and the devices are slowly reaching more and more markets but the availability is not widespread. One of the major reasons for the delay in the availability of these new devices is Covid-19 which has had an impact on production facilities due to lockdowns in many countries.
Now that the lockdown restrictions are slowly being lifted the production capacity should increase and the devices should start to go on sale in more countries. Nokia phones sold in India are manufactured within the country and with lockdown being lifted the production facilities in India should start functioning normally and the new Nokia phones should be available for purchase soon.
Nokia Mobile seems to be gearing up to launch new devices in India. If you are from India and have recently visited the Nokia Mobile India website you would have noticed that many Nokia mobile phones have been removed from the site. Only a total of 12 Nokia mobile phones are listed out of which 5 are featurephones and 7 are smartphones. Only ten phones are available and two are yet to be launched in India. Nokia Mobile has removed the Nokia 1, Nokia 2.2, Nokia 4.2, Nokia 6.1 Plus, Nokia 6.2 smartphones and Nokia 130, Nokia 150 and Nokia 8110 4G feature phones from the India website.
It is interesting to see that Nokia Mobile has removed the Nokia 6.2 as well which isn't a very old device. The removal of Nokia 6.2 suggests they are making way for the Nokia 5.3 which will soon take its place. Nokia 6.2 was sold for around Rs.13000/-INR so we can expect Nokia 5.3 to be launched in India in Rs.13000 - Rs.14000 price bracket. This is just my guess and the official price will be known only after the launch which appears to be close.
Except Nokia 3310 there is currently no other feature phone with 2.4" screen size being sold officially in India. Nokia Mobile recently launched two new features phones Nokia 125 and Nokia 150 which come with beautiful designs and practical features such as Big display, big buttons and Wireless FM Radio. We can also expect these two devices being launched along with the Nokia 5310. We cannot be sure when the launch will take place but we can expect it to happen within this month.
India India Launch Nokia 125 Nokia 150 Nokia 150 (2020) Nokia 5.3 Nokia 5310 Nokia Mobile Nokia Mobile Shop