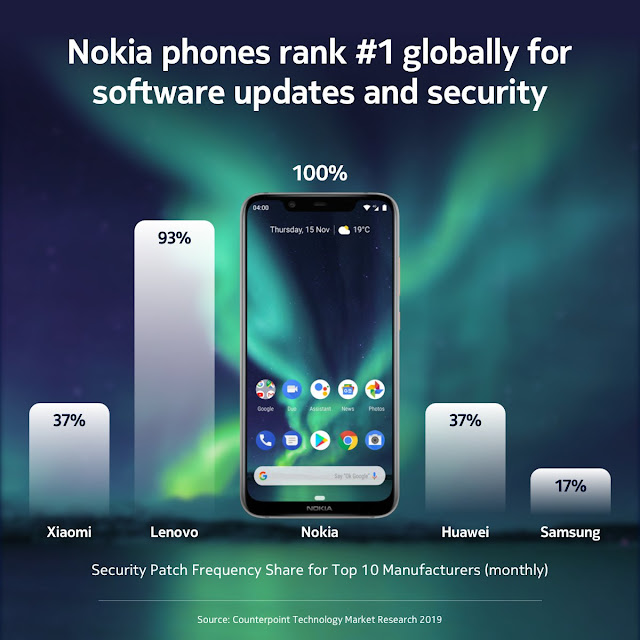 Counterpoint Research published an interesting report on Android software updates where they compared Top 10 global smartphone brands in providing the latest Android updates to their smartphones. Unsurprisingly, Nokia took the No.1 spot with a whopping 96% of its smartphones released since Q3 2018 updated on the latest version of Android. The remaining 4% seems to be lost due to Nokia 2.


Nokia has been doing incredible work on providing monthly security patches to its entire smartphone range and also updated them to the latest version of Android in less than a year. Nokia is focussed on providing Pure, Secure and Up to Date Android to all their devices which according to them will make the phones better over time. New major OS updates do bring new features and other optimisations which may improve the performance and is also refreshing for the user. But, stock android will remain stock and many smartphone buyers don't find this vanilla version of Android appealing and monthly security updates  as a buying decision come at last while considering a new phone purchase

Counterpoint's Research Director, Peter Richardson, noted, “Operating system and security updates are an aspect of Android smartphones that get relatively little attention. In our experience researching the industry, we have seen few brands focusing on this. And perhaps because manufacturers are not talking about it, consumer awareness is also low. It doesn’t appear among the ten features consumers say they care about most, in our research.”

I agree with the above statement as I have seen most people not interested in software updates while buying a new phone. This shows people aren't aware but many also don't want the vanilla android that does look pale in comparison to offerings from Samsung, Oneplus and others that also add many small and extra features which Google hasn't bothered to add since years or tales a lot of time to do it. In terms of features, stock Android lags behind other custom versions by a big margin. 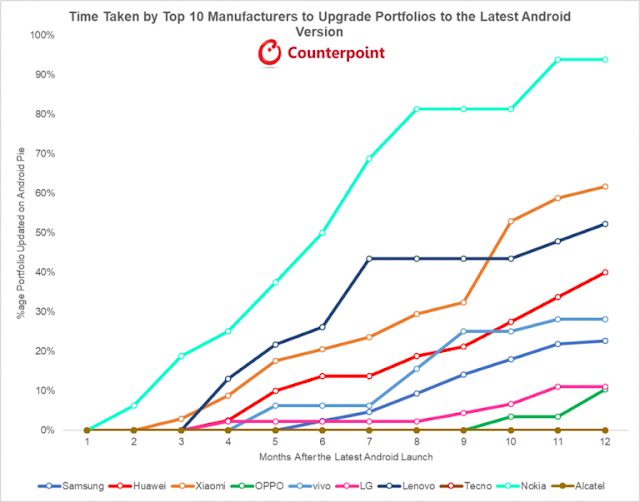 If you look at the graph above, other brands with custom UI have been updating most of their smartphones to latest Android versions. Surely, they aren't updating all their smartphones at the same frequency as Nokia but these are the brands which rank way ahead in terms of global smartphone market share. This has something to do with the software experience they provide by baking in more features and also providing important security updates to their devices.

Nokia Mobile has its very own customised version of Android which they offer on devices sold in China. This custom version is close to stock but comes with many useful features and these phones also receive regular OS updates and security patches in China. So, if possible, Nokia Mobile should definitely make some changes to this custom version by removing China-specific bloat and launch a few new devices with this version of Android as well. Maybe, this could help gain more buyers who are interested in themes and other extra customisation features that custom android version offer. Give users some more options and not just Android One. :)

Overall, Nokia is the only brand that has been updating all of their devices (Flagships to Low End) to the latest android versions in the shortest time possible. So, if you buy a Nokia smartphone there's a guarantee that you will receive major Android updates for two years and continuous security patches for three years further expanding the life of your smartphone. So, no more investing your hard-earned money every 1-2 years on buying a new smartphone.