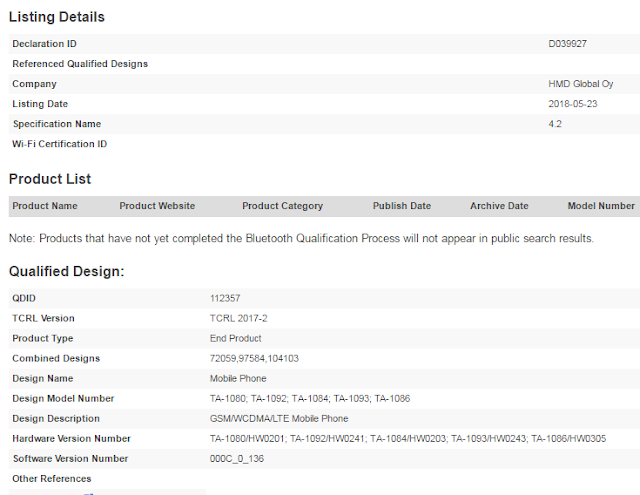 Nokia Mobile/HMD Global is holding a launch event in Russia on 29th May where they are expected to launch some new Nokia smartphones. Now, just a few days ahead of the launch event, five new variants of a Nokia smartphone have cleared the Bluetooth certification process.


The devices that passed the Bluetooth Certification process carry the model numbers TA-1080, TA-1092, TA-1084, TA-1093, and TA-1086. As per the listing, all the variants support Bluetooth 4.2 which indicates that these are mid-range devices. We recently also saw the Nokia TA-1057 and Nokia TA-1063 passing the FCC and these devices also support Bluetooth 4.2 and they also have three other variants i.e. TA-1049, TA-1070 and TA-1074 which passed Bluetooth certification last month.

Based on the Bluetooth version, we are assuming these devices to be the 2018 versions of the Nokia 3 and Nokia 5 which were launched over a year ago. These devices could be Nokia 3.1 and Nokia 5.1 and we should soon see them being launched at the upcoming Nokia Mobile launch event in Russia on 29th May.