Nokia 7 Plus with Snapdragon 660 processor spotted on Geekbench. 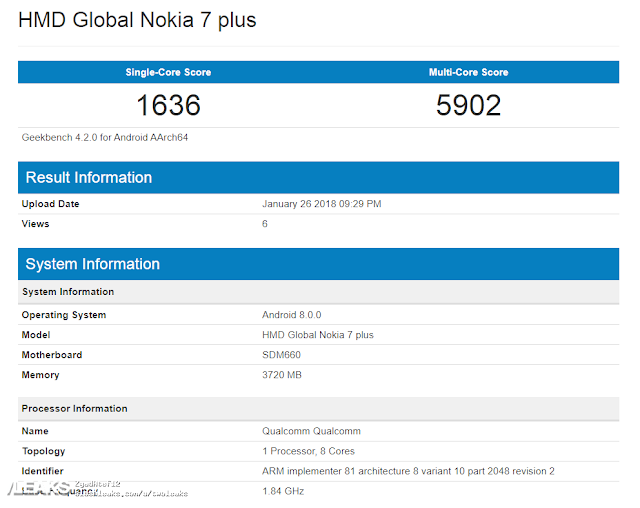 Nokia 7 Plus has been spotted on the Geekbench database revealing some of its specifications. The specifications listed are very modern and it could be the best mid-range Nokia smartphone to come out this year from HMD Global.


According to the geekbench listing, Nokia 7 Plus will run on Android 8.0 Oreo out of the box and will be powered by a Qualcomm Snapdragon 660 Processor coupled with 4GB RAM. This is an upgrade over the SD630 used on the Nokia 7 which was exclusive to China. We can expect the Nokia 7 Plus to come with ZEISS Camera, OZO Audio, and DualSight which are also present on the China-exclusive Nokia 7.

As the Nokia 6 (2018) has been launched with SD630 processor it makes much more sense to use the SD660 on the upcoming Nokia 7 Plus. As this is a "Plus" variant, I expect it to come with a larger display as well.

We don't see any mention of the model number of the device so I don't know if this is to be believed or not. We also saw the names of unannounced Nokia devices revealed in the camera APK and Nokia 7 Plus was one among those. If this info is real then we might see Nokia 7 Plus announced at the MWC.

What do you think about this info? Do you believe it or not? Want to discuss more about this? Share your thoughts in the comments section below. :)

via: Slashleaks
Geekbench Nokia 7 Plus