Posted by Kartik on November 08, 2020
Mr.Mobile (Michael Fisher) has been creating When Phones were Fun series of videos since a while now and I am sure many of you would have got to see the coolest phones from the past through his videos. This time around we got to see an unexpected real prototype smartphone being made by HMD Global. In his the latest episode of the series dedicated to ultimate classic Nokia N95, he also showed a non-functional prototype of a Nokia smartphone inspired by Nokia N95 sent to him by HMD Global.

To be straight on point, Nokia N95 was a swiss army knife of mobile phones in its time. The main highlight of the phone was its two-way slider mechanism which revealed a keypad if you slide up and media keys could be accessed by sliding down. HMD Global was planning to do something similar with modern smartphones and the non-working prototype shown in the video slides sideways revealing camera and loudspeakers. The ring surrounding the camera can also be used as a kickstand. You can watch the prototype in action in the video below:
The prototype shown in the video has a side slider mechanism where sliding one way reveals the front camera and the other reveals the powerful loudspeaker.  The only problem is that both these features can't be used at the same time. Juho Sarvikas also showed a few other sliding options which they had considered. The options include a top and bottom vertical slider same as the original Nokia N95, Top slider, side slider and Angle slider which is the coolest one of all and solves the problem faced in other options by allowing to use both front camera and loudspeaker at the same time.

We also explored a wide range of sliding options. Objective was to secure usability in both landscape and portrait as well as comfortable single hand use. How do you like the "angle slider"? 😉 You get into some pretty wild mechanics with some of these pic.twitter.com/HHLdSCD17i

The angle slider is cool but the Dual side slider mechanism is my favourite. It can be made to automatically open the camera or media centre based on which part has been slid out. So, if a user slides out the camera the phone detects it and jumps straight to the front camera ready for you to click selfies or if the user slides out the loudspeaker the phone understands and opens a dedicated media centre where users can select their favourite music or video streaming apps or play their own content. Wouldn't it be cool? 😁

A tiny improvement to the camera housing could be made by integrating the LED flash into the hinge of the ring that surrounds the camera. This would perfectly resemble the original Nokia N95. Also, mentioning the camera specs such as ZEISS, resolution and other info on the circular ring would look great. 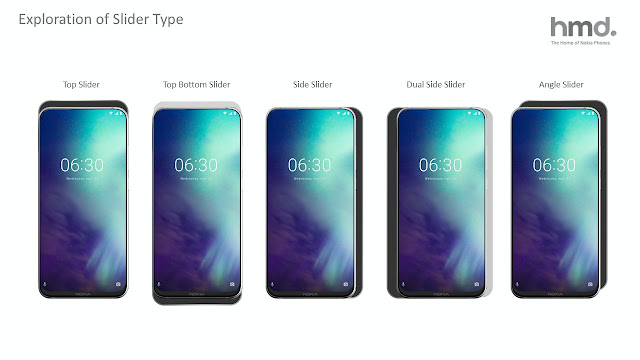 Another interesting thing found in this render above is the time mentioned on the phone's display. Could this have been the Nokia 6.3 if had not been cancelled ? The camera housing design of the prototype is in line with the current Nokia smartphones and if this wasn't cancelled could we have seen this launch as a Nokia 6.3? The Nokia 6.3 is not yet released so let's see if it brings any features or design elements from this prototype HMD shared.

I personally would love HMD Global to think again and make this type of a smartphone a reality. What are your opinions about trying new form factors on touch screen smartphones? Would you buy a Nokia smartphone with slide-out camera and loudspeakers? Share your thoughts in the comments below. :)