This is how Nokia's upcoming smartphone codenamed "Doctor Strange" will look like. 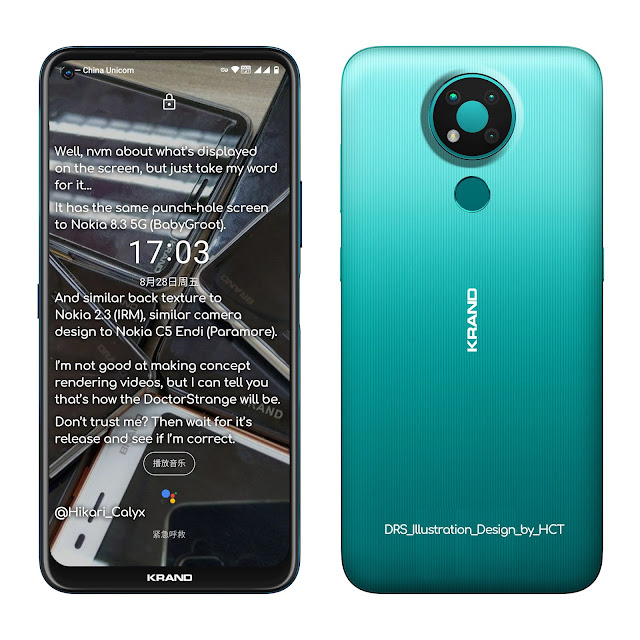 It is almost time that Nokia Mobile will bring new smartphones to the market and the recent leaks and rumours suggest the new devices could be launched sometime around in September. As per rumours, Nokia Mobile might launch the Nokia 7.3 5G, Nokia 6.3, Nokia 3.4 and a few feature phones.

One of the upcoming Nokia smartphones is codenamed "Doctor Strange" and Hikari_Calyx got to see the device and shared some information along with an illustration to show how the device looks like.  He couldn't share the real photos of the phone and created the above render based on the images. As per him, Nokia Doctor Strange has a punch-hole display similar to the Nokia 8.3 5G, the phone has a triple camera setup and resembles the Nokia C5 Endi in design. The back panel is textured just like the Nokia 2.3. There's also a physical fingerprint scanner at the back.

So, here you go. That's how the DoctorStrange looks like. NVM about the misaligned volume keys, I'm just showing how it looks like from the front and back. pic.twitter.com/mKGA1iNpiy

Nokia Doctor Strange was recently also spotted on Geenbench powered by Snapdragon 460 processor. The choice of processor, punch-hole display, triple cameras, fingerprint scanner strongly suggest this could be the Nokia 3.4. The textured back panel of Nokia 2.3 looks very nice and it should look good on the Nokia 3.4 with Oreo shaped camera housing too. I just wish HMD Global switches to a brighter colour palette that will make these budget phones pop in the overcrowded budget smartphone market.
Doctor Strange Hikari Calyx Nokia 3.4 Render Rumour