Nokia 9 PureView passes FCC. All rumoured specs that we know so far

After the Nokia 1 Plus (TA-1123), Nokia 9 PureView also received the FCC certification. Two variants got certified and the label information revealed a few details about these different variants of Nokia 9 PureView. As per the label information, TA-1094 is a Dual SIM variant for the Chinese market. TA-1082 and TA-1087 are Single SIM and Dual SIM variants respectively for Rest of the World (ROW).

The label info also reveals the sketch of Nokia 9 PureView which shows the back of the device with Penta Lens camera set up along with a flash and probably the laser focus sensor. As seen in the image below, Nokia 9 PureView will be an Android One device which obviously will be running the latest Android Pie out of the box 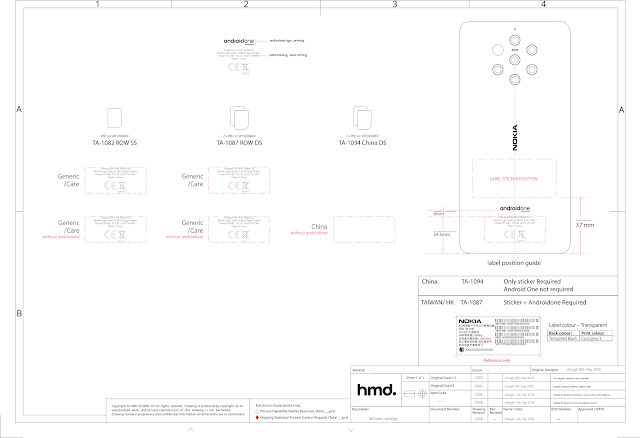 There is also a package label which confirms the name of the device to be the Nokia 9 PureView and also indicates that this new Nokia flagship smartphone will be launched in the USA. Check the package labels of TA-1087 and TA-1082 below.

Russian Community, Nokia Anew also shared some information about the cameras and the different storage variants of the Nokia 9 PureView. As per their sources, all five cameras on the Nokia 9 PureView will be of the same resolution. However, there are no specific details about the type of each camera sensor used on the phone.

The physical size of EACH sensor is larger than Nokia 7 plus's sensor, for example. 😏#Nokia9 #Pureview
— Nokia anew (@nokia_anew) February 14, 2019

They further revealed that there will be no 3D depth sensor used in the Nokia 9 PureView and the physical sensor size of each of the five sensors will be bigger than the sensor size of Nokia 7 plus.

Coming to storage, Nokia 9 PureView will come in 4GB/64GB and 6GB/128GB storage options. Only the 6GB/128GB version will be launched in Russia whereas price sensitive markets will receive both the storage variants.

Here's a quick look at the known specifications of Nokia 9 PureView:

Nokia Mobile's MWC2019 launch event is just a week away and we will soon get to know everything there is to know about this flagship Nokia smartphone.