Google released Android 8.1 Go edition for devices with less than 1GB RAM but as Nokia 2 isn't an Android GO device it can't be directly updated to Android Oreo Go edition. So, Nokia Mobile tried implementing many Android GO optimisations to the normal Android 8.1 Oreo for Nokia 2 but the overall user experience isn't as smooth as on Nougat and hence they are giving users the choice of staying on Nougat or updating to Android Oreo.

Those of you who are interested in updating their Nokia 2 to Android 8.1 Oreo can request the OTA from the link below and follow the steps on the webpage to complete the process.

Sadly, Android Oreo for Nokia 2 isn't available in the following countries and from these few operators which are listed below:

I requested the OTA on my Nokia 2 and below is the screenshot of the same. The update is 1362.8MB in size and the version is now V1.15R. The update still brings the December 2018 Android Security patch and I hope the latest security patch update is on its way. :) 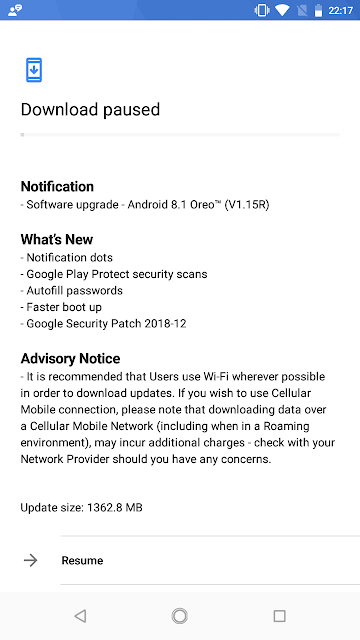 Did you request and install the Android 8.1 Oreo update for Nokia 2? If you have any questions regarding this you can ask them in the comments below. :)
Android 8.1 Android Oreo Nokia 2 Nokia Mobile