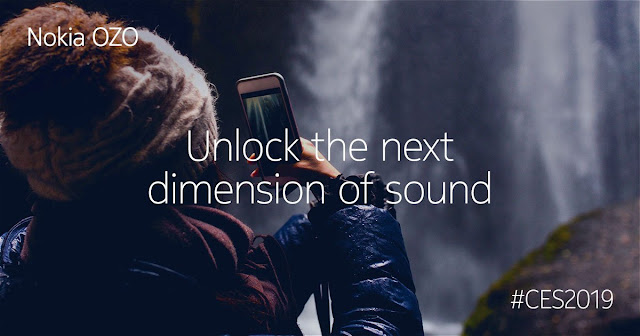 Last year, we saw Nokia’s OZO Audio tech making its way to smartphones and the first phone to implement it was the Nokia 8 which supports full 360° Spatial Audio capture while recording videos. Nokia's OZO Audio tech uses multiple mics to capture High Fidelity surround sound audio on a smartphone. This is a very neat and important feature to complement the high-resolution videos recorded on smartphones and helps to relive the moments by giving you a very immersive video watching experience even when you watch them at a later point in time.

This was just the start of the OZO Audio and now Nokia has developed this tech further and made a lot of improvements and upgrades which will completely change the smartphone audio recording experience or as Nokia describes it “Unlock the Next dimension of sound”. At CES 2019, Nokia announced many new OZO Audio features or upgrades which I'll list down below:


As Nokia's OZO Audio records sound in 360°, it also captures wind noise which can be a problem and Nokia has solved this by making some wind detection algorithms which can identify the wind noise and reduce them while processing the audio. This means now the videos recorded on smartphones under windy conditions will have a lot clear audio free of wind noise. Check out the tweet below:

With Audio Tune, users will now be able to edit and fine-tune the audio recorded via smartphones with some edit tools. Not many details are mentioned on the official site but this appears like an audio edit tool either built into the smartphone or a separate app with the help of which users will be able to edit the sound on their smartphones itself.

This feature changes it all and the demo was shown by Nokia on their youtube channel. Traditionally, while recording a video on a smartphone the entire range of sound coming from all directions is captured. With OZO Zoom you can control which sound source to be given the priority. For example: While recording a video when you zoom in on the subject OZO Zoom will give priority to the sound coming from that particular place visible on the viewfinder and all other background noise will be reduced. Watch the video below which will help you understand it much more easily.


We already know about this feature and is also implemented on many Nokia smartphones like the Nokia 8 and 7 plus. Audio 3D is the main feature of OZO Audio and captures sound coming from all directions and in great detail. Check out the demo video below and wear your headphones to experience OZO Audio.

Meet OZO #Audio3D and capture depth, direction and detail without missing a moment all on your mobile device. https://t.co/kd1L0ikFlm
— Nokia OZO (@NokiaOzo) January 7, 2019


We have already seen a demo video of OZO Audio Focus where users just have to tap on the viewfinder to tell it where to focus for the audio just like we tell the viewfinder to focus on a particular object while recording a video. This is a very smart feature and with just a single tap on the screen, OZO Focus knows what audio is to be focused on and it also tracks that audio source while avoiding other background noise.


All these OZO Audio features are designed for smartphones in mind and will completely change the way audio is recorded on smartphones. Now let's take a look at the basic requirements for OZO Audio to work. It requires a minimum of 2 mics for spatial capture and for full 360° Spatial audio capture 4 or more mics are required and of course, the manufacturer has to implement the OZO Audio tech in their smartphones. The audio recorded is in AAC format and doesn't require any dedicated hardware and can be played even on smartphones that do not support OZO Audio or can even be shared on the internet without losing the surround sound experience.

Nokia Mobile is probably going to launch their Nokia 9 PureView by the end of this month and it would be nice to have these new OZO Audio features present on the camera-centric Nokia flagship. These new OZO Audio features can give Nokia 9 PureView a big competitive advantage and allow it to include lots of innovation in the Audio department which none other smartphones would have. However, it is to be noted that OZO Audio is not just exclusive to Nokia smartphones and any other smartphone manufacturer can license this tech from Nokia and implement it on their smartphones.

We will have to wait to know if these new features can be added to older devices like the Nokia 8 and 7 plus via a software update as both these devices come with 3 microphones and support OZO Audio. It would be amazing to get these features on one of the 1st devices to come with OZO tech.

It feels good to see Nokia rising back again with innovative technologies like this which are connected to the consumer world. What are your thoughts on these new OZO Audio features? Do share them in the comments below. 🙂