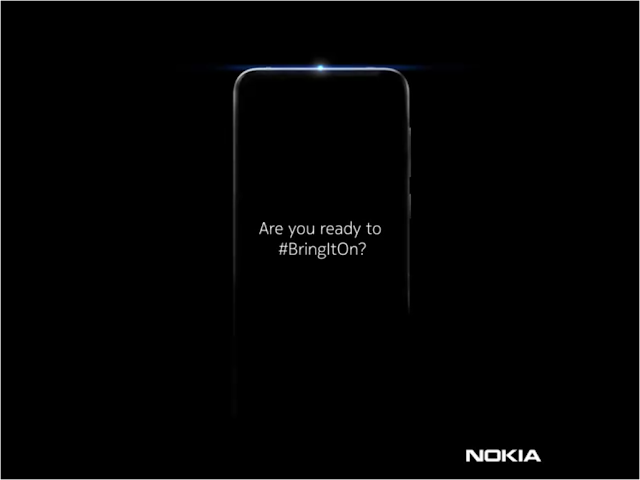 Nokia Mobile India tweeted a teaser video with a silhouette of a phone with a question "You asked for it and now we are asking you. Are you ready to #BringItOn?" It seems Nokia Mobile is giving hints of the Nokia 6.1 plus launch as that is the phone which was highly requested by many on social media.


We all know that Nokia Mobile is holding a launch event in India on 21st August where they might launch the much awaited Nokia 6.1 plus in India. Below is the tweet from Nokia Mobile India.

We are thrilled to bring you the Nokia smartphones event for the most awaited phone. Stay tuned to #BringItOn with #NokiaMobile pic.twitter.com/v1ZHBnTSri
— Nokia Mobile India (@NokiamobileIN) August 16, 2018

There is a possibility that this could also be a global launch as the global Nokia Mobile account also shared a similar image with a message saying "Get ready to unveil the most awaited phone". Below is the tweet.

We are thrilled to bring you the Nokia smartphones event for one of the most awaited phones on Tuesday 21st August. Stay tuned for more! #Nokiamobile #BringItOn pic.twitter.com/LXgnzguDvm
— Nokia Mobile (@Nokiamobile) August 16, 2018


Could this be the Nokia 8 (2018)/Nokia 8.1? Nokia 8 was launched on August 16th, 2017 in London and it's been exactly one year since its launch and Nokia Mobile could also announce the successor of this affordable flagship. However, the chances of this phone being launched are very low and this was just my assumption as it has been a year since the 1st Gen Nokia 8 was announced.

So, what do you think is "the most awaited phone" that Nokia Mobile is teasing? Is it the global Nokia 6.1 plus? OR Is it the Nokia 8.1? Which Nokia smartphone are you eagerly waiting for? Do share it in the comments below. ☺️
#BringitOn India Launch Event Nokia 6.1 plus Nokia Mobile