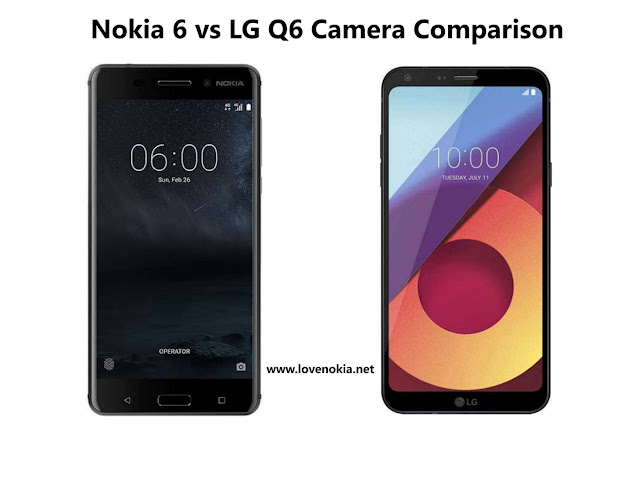 LG Q6 was launched in India just two weeks before the first Nokia 6 flash sale. Many were confused in choosing the right device between the two. So, Before I start writing about the Camera comparison of Nokia 6 and LG Q6 lets just do a short comparison between both of these devices. :)


Both these phones are made out of aluminum but Nokia 6 has a complete metal construction, unlike LG Q6 which has a metal frame and a glossy polycarbonate shell at the back which can be a fingerprint magnet and can also get easily scratched. Both the devices have 3GB RAM and run on Snapdragon processors. LG Q6 has a slightly newer SD435 over the SD430 used in Nokia 6. Both the phones come with latest Android Nougat out of the box. However, Nokia 6 comes with stock android whereas LG Q6 comes with LG's own UI on top of Android.

Nokia 6 also comes with a Finger Print scanner placed in the front whereas LG Q6 doesn't come with a Finger Print Scanner. Both Nokia 6 and LG Q6 come with 5.5" 1080p displays. The only new feature in the LG Q6 is its display with 18:9 aspect ratio.  If you keep that narrow display aside Nokia 6 offers much more value compared to the LG Q6. The only feature left to compare is the camera. So, here is the Camera comparison done by Geekyranjit who is one of India's biggest tech Youtuber. Check out the comparison in the video below:

Share your thoughts in the comments below. :)
Camera comparison Nokia 6 Nokias 6 vs LG Q6