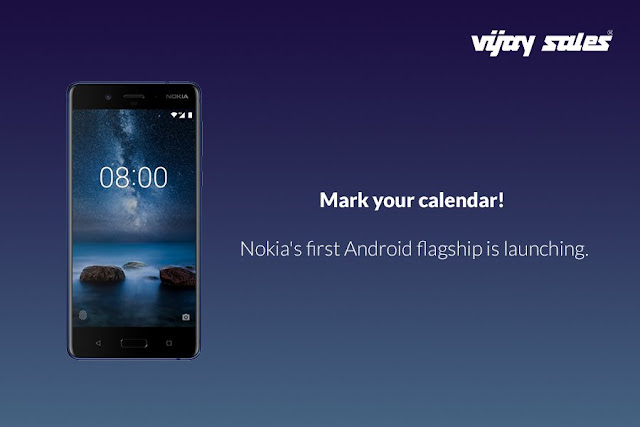 We all know about HMD Global holding a launch event in London on 16th August but there was no confirmation on the phones that would be launched on that day. Now a major Indian Retailer - Vijay Sales has teased the launch of Nokia 8 on Twitter. The text in the image describes the phone as "Nokia's first Android Flagship" and reminds to "Mark your Calender". The phone in the image looks same as seen in the previous renders which I shared earlier.

As the information has come directly from Vijay Sales, we can safely assume that the phone might be available for purchase very soon after the launch unlike the current delay in availability of Nokia 5 and Nokia 6. You can check the embedded tweet below.

The first #Nokia flagship Android phone is launching on August 16th. Are you excited for it? Re-tweet and let us know. #Nokia8 @nokia pic.twitter.com/rC29IjAqte
— Vijay Sales (@VijaySales) July 29, 2017


How excited are you for Nokia's first Flagship Android phone? Share your thought in the comment box. :)