Last year, Nokia and Flipkart teamed up and launched a 55" 4K UHD Smart TV in India. The first Nokia branded Smart TV got good reviews from buyers and has a rating of 4.4 out of 5 as can be seen on Flipkart. The TV was huge at 55" and not everyone wants or can buy such a big TV and to reach more households they needed something small. Flipkart is now ready with a smaller version of the Nokia Smart TV. It is a Nokia 43" 4K UHD Smart TV which they will launch on 4th June.
The upcoming Nokia Smart TV is the smaller model but does not miss out on features which the 55" model came with. The upcoming Nokia Smart TV runs on Android 9 and comes with a 43" 4K UHD LED panel and has Dolby Vision for better viewing experience. The sound is optimised by JBL and the TV also comes with DTS Tru Surround sound from Dolby Audio. The TV also comes with Chromecast built in for easy screen mirroring. 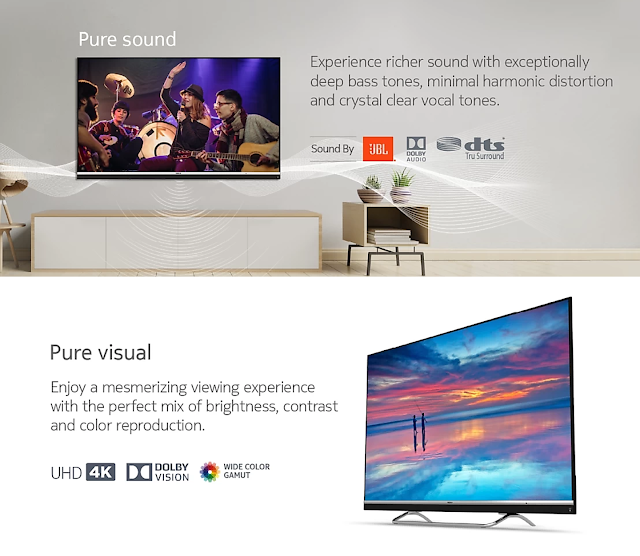 The Nokia 43" 4K UHD Smart TV looks the same as the 55" model. The TV looks slim in images, has slim bezels and the pedestals come in chrome colour. Flipkart calls it a geometry inspired design and if it looks exactly the same as the Nokia 55" 4K UHD model then it should look very beautiful.
Other specifications are not yet known and will be revealed on Flipkart only after the TV is launched on 4th June. If you are planning to buy a Smart TV then you should definitely wait for this one to launch.
Source: Flipkart
Flipkart Flipkart Exclusive India Launch Nokia Nokia 43" 4K UHD TV Nokia Smart TV