Nokia 400 4G could be launched soon - Is this the previously leaked "Iron GAFP" Android Feature phone? 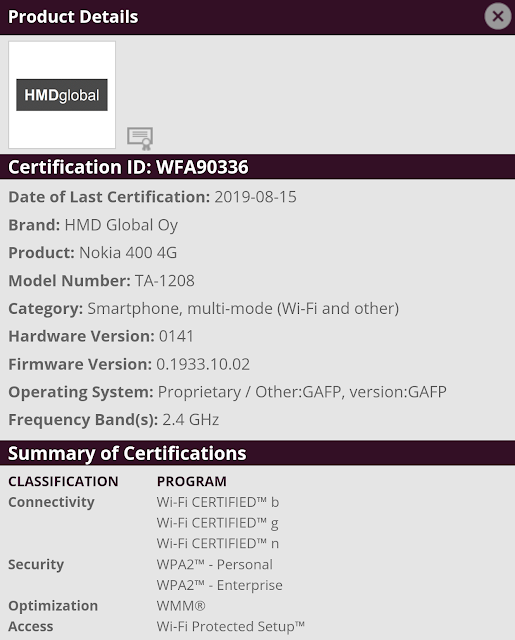 A new Nokia device carrying the model number TA-1208 had received Bluetooth and WiFi certifications at the end of 2019. The certification data only shared info about the Bluetooth version and the supported WiFi standards.


As per the certification data, Nokia TA-1208 will have Bluetooth 4.2 and supports WiFi b, g, n standards. The Bluetooth version suggests it will be a low-end device and the listing also referred to it as an LTE mobile phone and not a smartphone. The WiFi certification data has also been updated revealing the name of the device which is Nokia 400 4G.

The WiFi certification data which usually also reveals the OS version of the phone just mentions it as having a "Proprietary OS" with the version specified as GAFP. Last year we saw a leaked video of a Nokia feature phone codenamed "Iron GAFP" running on Android 8.1. If the GAFP in the codename of the leaked device is the OS version name then it is possible that we are looking at the same phone. The leaked video showed the phone had many Google apps such as Chrome, Assistant, Maps and Youtube pre-installed. I couldn't find what GAFP stands for so can we call it Google Apps on Feature Phones (GAFP)? 😅

Could Nokia 400 4G be the Iron GAFP feature phone which is nearing its official launch? To find out we will have to wait till MWC2020 which is just a month away where Nokia Mobile will launch its new devices. :)
MWC 2020 Nokia 400 4G Nokia Mobile TA-1208 WiFi Certification