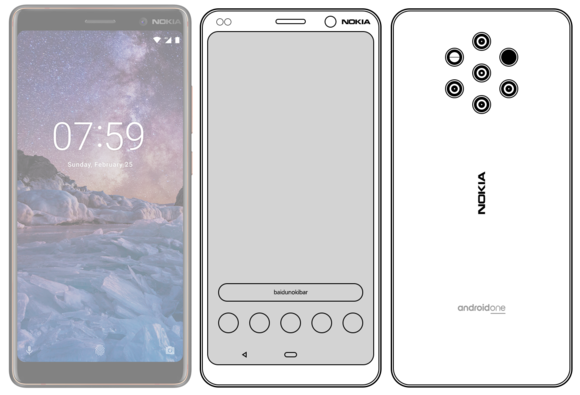 As it can be seen in the image above, the size of the Nokia 9 PureView looks almost the same as the Nokia 7 plus which suggests that Nokia 9 PureView could come with a 6" 18:9 aspect ratio display without a notch. At the top left corner, it has some sensors (Proximity and Ambient Light), earpiece in the center followed by the front camera and Nokia branding at the right corner. The rear panel of the Nokia 9 PureView has the five cameras with an unknown sensor and Dual LED flash. At the bottom, we have the Android One logo meaning this will also be a part of the Android One smartphone family. We don't see any Fingerprint scanner at the back or the front suggesting the presence of an in-display fingerprint scanner.

Some rumors say Nokia 9 PureView will be launched before the end of 2018 while some rumors point at the MWC 2019 launch. We are not sure when we will get to see this camera-centric Nokia flagship smartphone but with all these leaked images and rumors we can expect it to be launched in a few months.