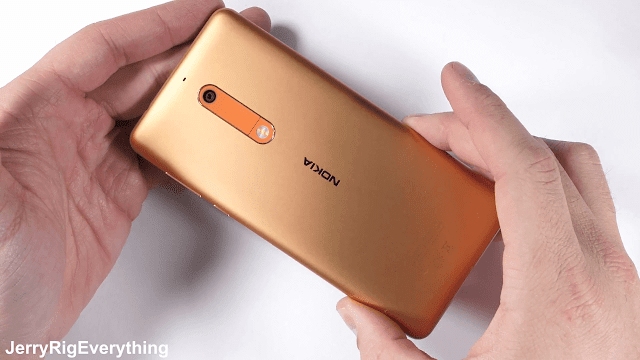 The durability tests were performed on the beautiful Copper color variant of Nokia 5 and starting with the scratch tests, Nokia 5 performed very well. The interesting finds from the scratch test are:
i) The Camera is covered with glass and the LED Flash also sits under the same glass. Use of a glass to cover the Camera and Flash helps in reducing scratches as it can be seen in the video.
ii) The Nokia logo at the back of the phone is nicely attached and won't come off easily as it was previously seen on a few devices. This means HMD Global has worked on this issue and it has been sorted out.

During the burn test we can see Zack heating the IPS LCD panel on the Nokia 5 and after a few seconds, the display comes back to normal as if nothing had happened, unlike the AMOLED displays which tend to leave burn marks

Moving forward to the Bend test, Nokia 5 shows no signs of bending at all same as all other Nokia smartphones and Zack seems pretty impressed with Nokia and goes on to say that "Nokia once again has built a beast". All Nokia smartphones have an amazing build quality at all price segments starting from the budget Nokia 2 to the flagship Nokia 8. Check out the Nokia 5 Durability Test in the video below:


You can also check out the Durability Tests of Nokia 3, Nokia 6 and Nokia 8 done by JerryRigEverything.

Are you the proud owner of the Nokia 5? What are your thoughts on the Build quality of Nokia 5? Share it in the comments section below.  :)
Durability Test JerryRigEverything Nokia 5