Posted by Kartik on January 24, 2017
Nokia might launch 6 to 7 smartphones this year, from budget smartphones to high-end flagship smartphones. Nokia smartphones will be announced at MWC in February. Till then, there will me many leaks of the upcoming smartphones from Nokia.


Thanks to GFXBench, we now have details on the upcoming low-end Nokia smartphone: Nokia Heart. Nokia Heart runs on Android 7 Nougat same as Nokia 6 which is recently launched in China.

Nokia Heart and Nokia 6 both are powered by Qualcomm Snapdragon 430 processors. And this is where the similarities between both the devices end. Nokia Heart has a 5.2" 720p screen whereas, Nokia 6 sports a 5.5" 1080p screen. Nokia Heart has 2 GB of RAM and 16 GB internal storage. As per GFXBench tests, Nokia Heart has 12 MP rear camera and 7 MP front camera.

HMD Global has planned to announce new Nokia smartphones in MWC on 26th February. Nokia Heart might be announced at MWC. 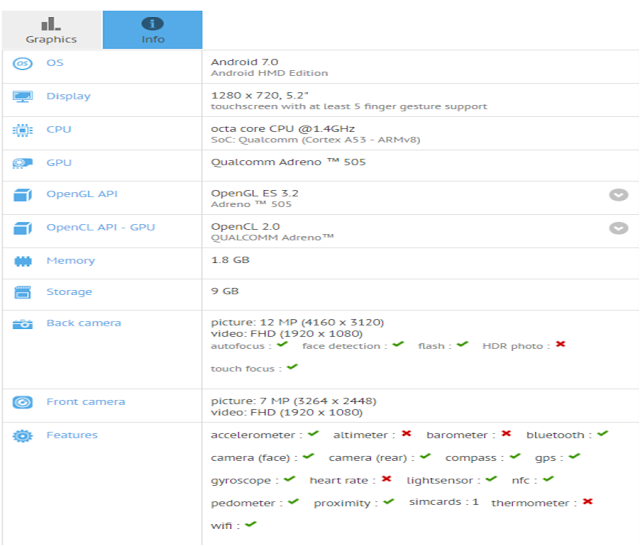